Urban Native Era’s new creative director, Hud Oberly, adds endless possibilities to the brand’s ever-growing community.
When Hud Oberly (Osage, Caddo, Comanche) was announced as the new creative director of Urban Native Era (UNE) at the beginning of March he immediately went from a commonly-seen model for the brand to decision-maker of all things creative. To some, it came as a surprise, but more so as news that he would be leaving his previous position. It would not take long for his daily duties to shift, but he and Founder/CEO Joey Montoya (Lipan Apache) will tell you the official announcement was, well, just that. The two had already begun planning their first Urban Native Era Experience months before the public announcement.

The UNE Experience, a pop-up store on community-building steroids was the brand’s first solo in-person event, and scheduled for March 14th. By the time Oberly’s ninth day on the job came around he and Montoya were faced with a decision neither could have imagined. They had received RSVP confirmations from nearly 600 people for their one-day 7-hour event and now needed to decide whether the show must go on or to raise the white flag to the global pandemic. They did neither. Instead of canceling or postponing, they stuck true to their word of providing an experience to their community by hosting a 7-hour continuous live show. Oberly and Montoya filled the Instagram and YouTube airways with their back-and-forth banter, special guests, live music performance and even eating a massive meal while they spoke to their audience, also known as a mukbang. In a recent Facebook Live video (still available on the Urban Native Era Facebook Page), Oberly shared, “It’s not great that this is going on, but this is the kind of stuff, the pressure, that gets me excited and pulls out some creativity.” That near-delusional positivity is something consistent in him, and something that has helped get him to where he is today.

Oberly grew up in the suburban college town of Norman, Oklahoma but he says he had known for a long time that he was not meant to stay in Oklahoma. Growing up, his summers were filled with his tribes’ traditional gatherings, the Osage In-Lon-Shka in June, Comanche Homecoming Pow Wow in July and Caddo gatherings at the Binger Y, just outside of Anadarko.

Once the summer gatherings concluded in 2013 Oberly headed to the Rocky Mountains to attend the University of Colorado at Boulder. During his time in Boulder he was a CU-Boulder Student Ambassador, First Nations Scholar, White Antelope Scholar, Cobell Scholar, member of the Gamma-Tau Chapter of Kappa Sigma, member of the Advertising Club, and held a CU-GOLD Core Leadership Certificate.

He credits his college experience with his positivity but not without some tough lessons, “I can be the type to learn the hard way. I made some mistakes as a college student that required another level of perseverance, not to just get through things, but to still continue to live an exciting life like I was living the dream, because in my mind I was.”

An Indigenous twenty-something with an invaluable college experience, a bachelor’s degree in Advertising with a Business Minor, and a low-cost-of-living situation back in Oklahoma sounds like the perfect set-up for most. After 7 months, Oberly said he remembers telling his dad he needed to get out, he just felt like he was missing something.

In one of his YouTube videos posted in April of 2019 he states, “I knew I wanted to get to a bigger city and chase whatever that way of living was that was probably just put in my head by the media or pop-culture but it was something that I wanted to do so I was going to chase after it.”

He went on to explain how he was writing emails to top-tier ad agencies in New York City and on down to small advertising agencies just to be there coffee boy knowing he just needed one break and he’d be on his way to his romanticized life. Simple as that right? One could only consider this delusional if it wasn’t accomplished (hint: it’s still near-delusional). 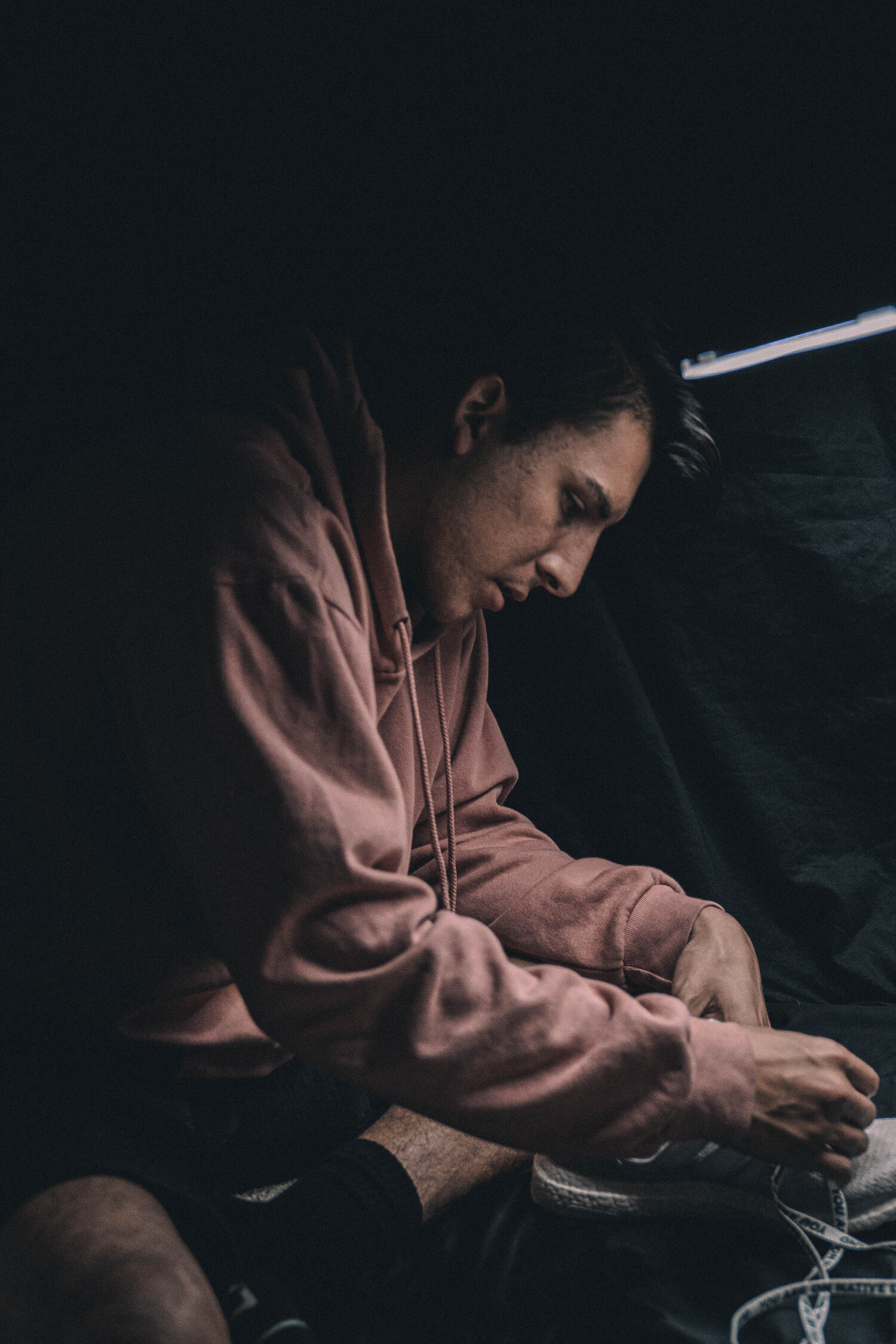 His break came calling from Los Angeles, California by Sundance Institute’s Indigenous Program. Hired as the Program Coordinator in August of 2018, he was involved in many areas within the culture-based film program.

“At its core, our mission was to search for, develop and support emerging Indigenous filmmakers. The main group of people we tended to was the artists, they were first. I booked their flights, read their scripts, introduced them to other entertainment industry, whatever was needed in any given situation.”

He looks down to ponder then explains his time with the Institute, “It was an eye-opening experience that provided me new perspectives and the artists who were supported through the (Indigenous) program really do become a part of the family, a truly one-of-a-kind group I loved being a part of.”

Another duty was to support long-time Program Director, Bird Runningwater.

He continues, “And I have to point this out, for the amount of work that Bird has put in over the past near-twenty years, he is one of the most under-appreciated servants of Indian Country.” Oberly got to be a fly on the wall in rooms with today’s leaders of Indian Country during his time at Sundance Institute. As Creative Director of Urban Native Era, he seeks to contribute to the change taking place and build off of his other past experience.

Woven throughout Hud’s life is service to Indian Country. While in high school, he was asked to leave the office of the U.S. Senator from Oklahoma, Jim Inhofe, after he questioned Inhofe on his decision to overturn former President Barack Obama’s nomination of Arvo Mikkanen (Kiowa) to become a federal district court judge in Oklahoma (Mikkanen is Oberly’s uncle). Hud interned for United National Indian Tribal Youth (UNITY) Inc. under former Executive Director J.R. Cook. He has proudly represented Indigenous people in non-Indigenous spaces like when he gave the opening speech at the 86th Annual Conference on World Affairs in 2016. Already mentioned, his time at Sundance Institute where he championed Indigenous filmmakers from around the world. And lastly, in April 2019 he was announced as a board member of American Indian Graduate Center and American Indian Graduate Center Scholars. A laundry list of experience that Urban Native Era and more specifically Montoya sought out when the brand’s rapid growth became too much for the current manpower.

Hud and Joey have only been working together for the past few months but their undeniable brotherly bond moved into what you see today quicker than most bonds. After meeting in January 2019 they kept in contact messaging about different happenings in Indian Country specifically who was posting what on social media and the great things that other brands were doing within the community. Come March 2019, the two had thought about how Urban Native Era could benefit from being in Los Angeles and how the brand could highlight progress in representation within the entertainment industry. After eight months from meeting, the two were splitting a studio apartment in the Mid-Wilshire District of Los Angeles in the ultimate #entrepreneurship lifestyle saving money and working hard on their respective jobs. They would attend and/or separately work at events like the Santa Fe Indian Market, imagineNATIVE Film Festival and the 2020 Sundance Film Festival. Somewhere in that time frame Montoya approached Oberly about a role that would later become the Creative Director position. They have since moved from the studio apartment but now working and being around each other 24/7 Hud shares the extra room is welcomed.

Now Hud’s daily routine consists of marketing content, all hours of the day, all the time. Hud schedules and co-creates 60 to 75 pieces of content per week for Urban Native Era. This sounds near-delusional to you to post that much social media but Oberly attributes freedom to being able to accomplish his daily and weekly tasks. He has free reign for ideas from his new boss, he shares laughingly.

“(Joey) really gives me complete creative freedom, which is mindblowing and makes him sound crazy after all that he accomplished the first 7 years of UNE but it speaks to our compatibility, a common keen-eye for how things should be done, and his trust in me.”

Oberly shared a few things in the works for Urban Native Era long-term and short-term. Including additions to the brand’s content strategy coming as soon as the end of March 2020. Nothing more can be expanded upon here.  It is apparent that both Oberly and Montoya can see the potential of Urban Native Era with the expanded team but I am not sure if they even know all that is in front of them.