Calling all adults and high school youth!! Join us for our 10th Annual Youth Leadership Days – the VIRTUAL edition. Participation is FREE for American Indian high school students everywhere.
March 6th and 13th – schedule below is for both days:

END_OF_DOCUMENT_TOKEN_TO_BE_REPLACED

Here’s an opportunity for students to build their knowledge, leadership skills and their college resumes. The Youth Preparedness Council (YPC) was created in 2012 to bring together youth leaders interested in supporting disaster preparedness and making a difference in their communities by completing disaster preparedness projects nationally and locally. The application opened this week for students 8th through 11th grade.   END_OF_DOCUMENT_TOKEN_TO_BE_REPLACED

Youth Leader Submission: Boozhoo Ginewanakwad ndiznikaaz miishiks ndoodem, Mount Pleasat nidojiba. Hello my spirit name is Golden Eagle Cloud, I am of the Turtle Clan and live in Mount Pleasant. My English name is Thomas Rae Henry, attending Mount Pleasant High School. As a member of the Saginaw Chippewa Indian Tribe of Michigan, I enjoy running, playing guitar, skateboarding, and dancing at powwows. My interests are in fashion, native culture, traditional foods and medicines, our native language, politics, and economics. I run cross country and track and am the oldest sibling in my family. I take pride in having two sisters and a little brother who look up to me. I set a good example for the native youth in my community living a drug and alcohol free life. END_OF_DOCUMENT_TOKEN_TO_BE_REPLACED

With Tik Tok’s popularity on the rise among teens, we wanted to give parents a resource to understand the app and how they can protect their children. All Connect developed an in-depth resource provides parents and guardians with information on what Tik Tok is, how kids can be kept safe while using the app and how parents can monitor and track what their kids are doing on the app.
END_OF_DOCUMENT_TOKEN_TO_BE_REPLACED

Watch & Learn with Three Recordings of Tribal TTA Center webinars on the wellbeing of tribal youth and families are archived below. Opioid misuse is becoming epidemic throughout the country and across all ethnic, social, and age groups. Indian Country has been hit especially hard, however, and tribal communities are responding as quickly as they can to reverse this troubling trend. This four-part series will discuss best practices and how several native communities have responded. Also check out Prevention Campaign materials at https://doseofreality.com/ Ask  yourself,what can your Youth Council do to spread awareness?

END_OF_DOCUMENT_TOKEN_TO_BE_REPLACED

We Have Hope Q&A with Miss & Mr Indigenous ASU 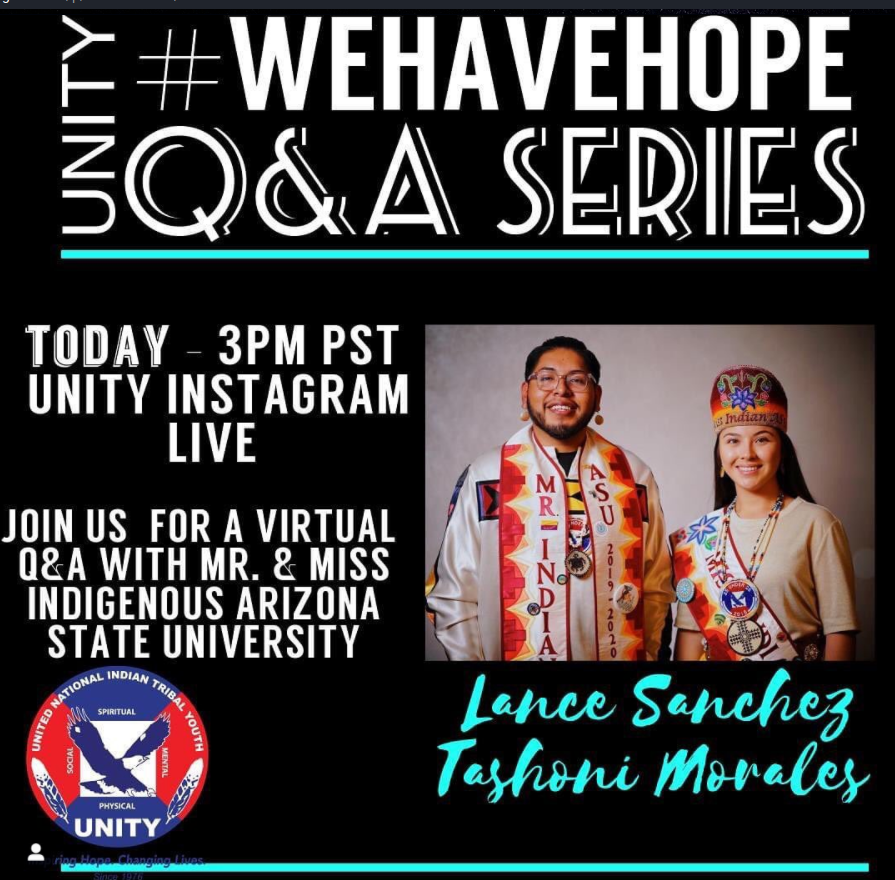 Not only were they influential in leading their Regions as Representatives serving on the National UNITY Council’s Executive Committee, but then took on representing higher education for the state of Arizona, while both being awarded UNITY’s prestigious 25 Under 25 national award. These power duo are the epitome of UNITY youth in action. Join us in welcoming our special guests, Ms/Mr. Indigenous ASU Committee Royalty! Lance Sanches and Tashoni Morales will be joining us for a Q&A about the completion of their reign representing Arizona State University. END_OF_DOCUMENT_TOKEN_TO_BE_REPLACED

Thank you to our Sponsors

United National Indian Tribal Youth (UNITY) joins the country in sorrow as we mourn the passing of civil rights leader and U.S. Representative John Lewis. He was a pioneer in leading the charge against injustice and inequality, and never stopped fighting for social justice and equal rights. He was often called “the conscience of the Congress,” and will be sorely missed.

“As UNITY pursues its mission to build a strong, unified, and self-reliant Native America, through youth involvement, we can hold John Lewis up as someone to emulate,” said MaryKimTitla (San Carlos Apache), UNITY executive director. “His story is a great example for young people today, proving that it’s never too early or too late to make a difference.”

“Representative John Lewis’s life is one we are all fortunate to have witnessed in our shared time on earth. Even before the age of 25, John Lewis fought for civil rights alongside several of history’s greatest leaders. As a youth, he created an everlasting impact with his actions, sacrificing his own safety to fight for what was right. He caused good trouble to create necessary change. He dedicated his life to the pursuit of liberty for his people, both present and unborn. As we celebrate his life and legacy, we must now, more than ever, embody the spirit of his fight and carry on the torch to light the way for future generations. Thank you, Representative Lewis.“

The live-streamed event to take place on Thursday, July 16 will explore what can be done to mitigate mental health issues impacting Native youth.

On Thursday, July 16 at 3 p.m. EST, Native youth leaders from United National Indian Tribal Youth, Inc. (UNITY) will participate in a congressional forum led by Ruben Gallego (D-Ariz.), chair of the Subcommittee for Indigenous Peoples of the United States. The subject of the hearing is Native Youth Perspectives on Mental Health and Healing. Native youth leaders from across the country will discuss the mental health impacts facing Native youth in the United States, education and safety, and ideas on how policy can reduce trauma and promote healing. END_OF_DOCUMENT_TOKEN_TO_BE_REPLACED